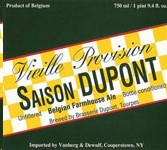 Producer The brewery is an independant business, runned by the family Dupont, specialised in the production of beers with refermentation in the bottle: Moinette, Saison, Bons Vœux… Since 1990, we have been brewing a part of the production under organic license with the Biogarantie® label: Moinette bio, Saison bio, Biolégère, Blanche du Hainaut, Bière de Miel biologique… We still do brew the traditional way and our yearly production depasses 15. 000 hectolitres. You can find our beers going in export to different countries: USA, Japan, Canada, France, Italy, The Netherlands, Danmark, Uk… Highly quoted specialist and recensents (M. Jackson, T. Webb, C. Deglas, J; Vandesteen…) describe our beers as very typical and traditional and are stipulating our stubborness when talking about bitterness… Our products are very popular in the States where we, on a regular base, are awarded with prices. In 1997, during the World Beer Championship in Chicago, we were nominated as one of the ten best breweries in the world. As a matter of fact, in 2005, our Saison Dupont, was elected as “The Best Beer in the World” by the American “Men’s Journal”!