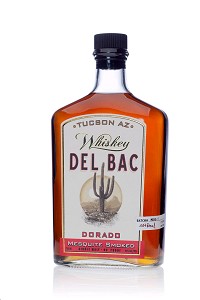 The original brainchild for our product line, the Dorado required that we learn how to malt barley. Born out of barbecuing with the mesquite scraps from Arroyo Design while drinking Scotch, we had the idea to malt over mesquite instead of peat. We wanted to create a product that was a true reflection of the Sonoran Desert. To achieve that, we dry our malt over a mesquite fire using the species Prosopis Velutina, the predominant species in Southern Arizona.

With sweet tobacco and dark chocolate on the nose, underpinned by sandalwood, the Dorado may carry soft tannins on the palette with desert campfire and spice notes.

Producer
In 2006, while drinking Scotch and barbecuing with mesquite scraps from our custom furniture company, Arroyo Design, we had a thought. Why couldn't we malt barley over mesquite instead of peat, as they do in Scotland, for a single-malt whiskey with a flavor distinctive to the American Southwest

Arroyo Design had started with a similar question - Why couldn't we take this wild and spectacular wood from right here in the Sonoran Desert and make it into fine furniture, instead of using exotics from the rain forest Arroyo Design came to be a nationally recognized and much-published design and manufacturing company, thanks to the use of old-world joinery, careful wood selection and uncompromising attention to detail.

Graduating to a 40 gallon pot-still in 2011, it was time to get legal. Stephen and his daughter Amanda incorporated Hamilton Distillers in 2011 and product-development was officially underway. By 2013 the three distinctly different Whiskeys Del Bac hit the local Tucson marketplace, and were warmly embraced by The Old Pueblo.

By January of 2014, enough investment had been raised to begin implementing a 500 gallon distillery and malt house in a larger location. Finally, on December 18, 2014, we ran our first spirit run on the new still and started aging barrels of whiskey.

While our first malting system involved floor malting 70 lb batches and then drying the malt in a meat style smoker we constructed, our new malthouse allows us to malt 5,000 lb batches using a tank system in which we are able to steep, germinate, and dry between two tanks. We have to make all the same evaluations and decisions on our new system as we did when we floor malted, but this larger system gives us more control, resulting in better malt.

After years of crafting furniture that was authentic, lasting, and handmade - wood kiln dried in house, furniture assembled with mortise and tenon joints, and finished with hand applied oil and wax - there was never any question or contemplation that Hamilton's whiskeys would be made otherwise. We do everything right in house. We malt our own barley, and we mash, ferment, distill, barrel and bottle under one roof.

After learning that so many 'craft' or 'artisan' American whiskeys actually come from the same megadistillery in Indiana, we are especially proud to say we do it all ourselves. It's as real as it could ever be.