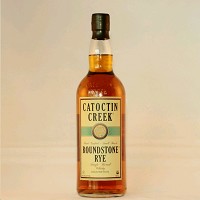 Our lovely 100% rye spirit is aged it in new Minnesota white oak casks for a period of just under two years, yielding a very special rye whisky! The hardest of all whiskeys to produce, rye whisky is an old time favorite that is new once again. It has a delicious woody taste, with notes of caramel, rich butter toffee, and just a hint of lemon in the nose. Awarded silver medals at the 2011 American Distilling Institute Whiskey Competition, the 2010 New York International Spirits Competition and the Beverage Testing Institute, Catoctin Creek Organic Roundstone Rye is one of the few organic whiskeys in the entire world. Roundstone Rye is a superb sipping whisky, a great mixer in Manhattans, or any recipe calling for Canadian or rye whisky. Delicious mixed, on the rocks, or neat. Try some this evening! Technical notes 40% ABV
Producer Catoctin Creek Distilling Company was founded by Becky and Scott Harris in 2009 as the first legal distillery in Loudoun County since before Prohibition. We are located in Purcellville, Virginia, in the heart of the Loudoun Valley. Loudoun County, often called D. C. s Wine Country, is home to more than twenty vineyards and wineries, and it now has a distillery. The name Catoctin is a regional name. Pronounced Ka-TOCK-tin, the name derives from the Indian tribal name Kittocton which, legend has it, meant place of many deer. Catoctin describes a range of mountains and the creek which flows picturesquely into the Potomac River and Chesapeake Watershed. At Catoctin Creek, we believe in high quality food and spirits. Organic means higher quality: grain and fruit, sourced locally when possible, free of pesticides and chemical additives that would come through in the spirits we produce. Sure, it is more difficult to produce organically, but the results speak for themselves. Sic semper secales! Thus always to rye!