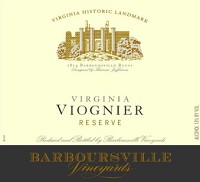 Located in Virginia, Barboursville Vineyards was established in 1976 by Gianni Zonin, a 7th generation winegrower from Gambellara, Italy whose family has been making wine since 1821. Barboursville Vineyards was one of the first wineries in the state and was also the first to grow vitis vinifera in Virginia. Italian born Luca Paschina is the winemaker and general manager. A graduate of Italy’s Istituto Umberto I, he produces small-lot, handmade wines in the Italian tradition in other words, food-friendly wines, with moderate tannins and solid aging potential. The estate consists of 900 acres, of which 162 are planted to vine on red clay. They grow French and Italian varietals. In short vintages, estate fruit is supplemented with purchased fruit from three growers in Lynchburg, Shenandoah Valley and Orange County, Virginia. Named after Barboursville Mansion, the manor was designed by Thomas Jefferson and was home to Virginia’s Governor Barbour until it was destroyed by fire in the winter of 1885. Food pairing Venison scaloppine in Viognier and lemon juice Pan-fried blue crab cakes & braised mushrooms Sea scallop gratin in cream sauce with fresh basil
Producer THE NEW GENERATION With its close ties to the land for the past seven generations, the Zonin family heads the largest private vine growing and winemaking company in Italy (and one of the most important in Europe as well). Domenico Zonin, President of ZONIN1821, since 2014, took over from his father Gianni Zonin, who has run the company since 1967 for forty years, transforming it from a local dimension to being one of Italy’s most important wine producers and an established, well- known brand all over the world. VINTNERS SINCE 1821 The heart of the company is located in Gambellara, in the province of Vicenza, an oasis of lush green hills, meticulously arranged vineyards, and also the ancestral home of the Zonin family. This history has manifested itself in the vicissitudes, the hard work and the inspired decisions of a family whose name is inextricably linked to passion for the land, its vines and wine. In the historic headquarters of the Company, the Zonin family began to produce wines on a small scale in the early 1800s. In the next century, ”Commendatore” Domenico Zonin would initiate an aggressive marketing strategy. This dynamic man, born in 1899, lived to the venerable age of 101, technically spanning three centuries. His youthful spirit bore witness to dramatic transformations of a way of life that evolved into modern present day in which a seventh generation of the family runs the firm. Today the Zonin family honor their family’s historical passion for the vineyard, the sine qua non for producing high-quality wines, by including ”Vintners since 1821” on their logo. The wooden wine press, located at the entrance hall of the Zonin’s headquarters in Gambellara, dates back to the beginning of the 19th century. In fact, the construction of wine presses, the way they work, and the system they use for pressing the grapes have essentially remained unchanged since early Roman times.