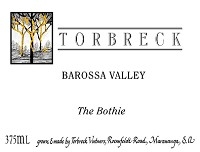 Torbreck Vintners was founded by David Powell in 1994. Dave was working at Barossa's Rockford Winery when he began dreaming of his own wine label, dedicated to making wine from some of the valley's oldest vines He helped a few area growers nurture some neglected, decades old Shiraz and Grenache vines back to health. Nearly lifeless and overgrown he was rewarded with a few small parcels of dry grown fruit, which he turned into wine. Contracts were then negotiated for the use of these vineyards with the individual growers, and so the old practice of share farming returned to the Valley. This secured for Torbreck a regular supply of the best Barossa Shiraz, Grenache, and Mataro (Mourvedre) vineyards containing some of the oldest vines in the world, between 120 to 160 years old. His Torbreck label, named after a forest in Scotland, where he worked as a lumberjack, debuted in 1997 with the release of a small 1995 vintage. Yields are invariably low, and the resulting wines are deeply impressive. Torbreck wines, like the Cornas, Condrieu, and Hermitage that Powell holds up as inspiration, are muscular but not beefy, pleasurable even as they lean towards profound. The wines have been praised effusively since the beginning by the world’s leading wine critics and journalists and are represented on the wine lists of the world’s best restaurants. In 2008 the completion of a state of the art, eco-friendly winery, packaging and administration building has meant the realization of David’s goal to have all Torbreck wines produced and bottled on the estate. Torbreck remains a Barossa Valley benchmark as well as one of the world’s leading wine estates.