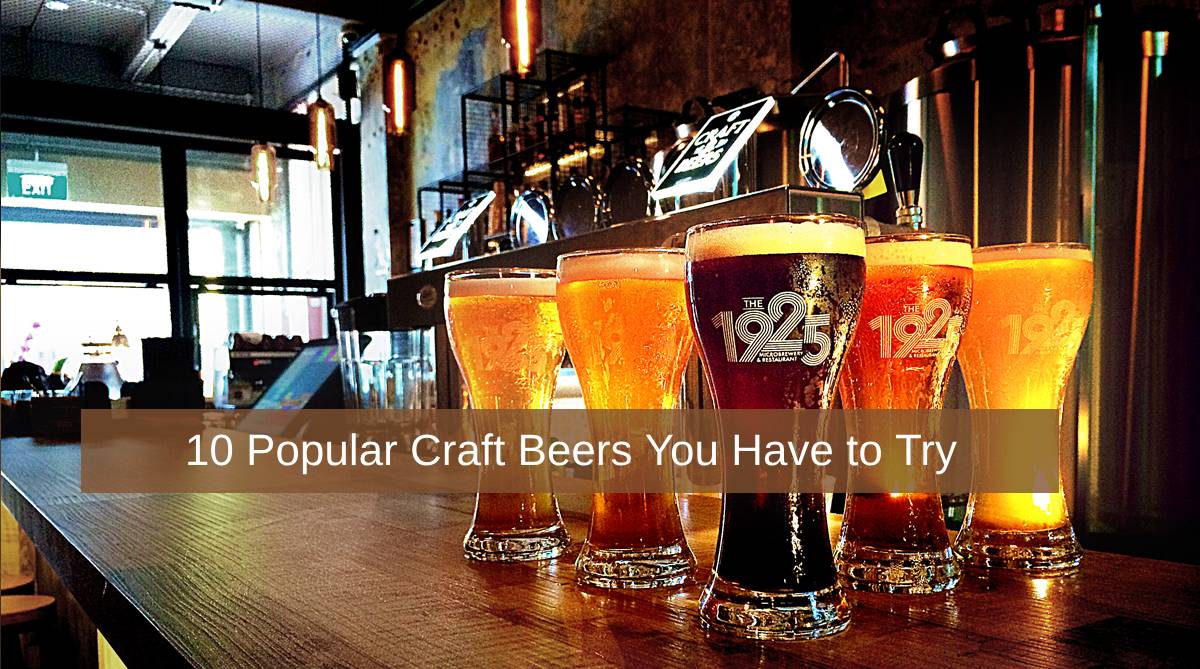 Do you love craft beer? Have you been enjoying it for years, or are you looking to get involved in drinking it more as a recent interest? Do you find yourself wanting to branch out and discover some of the best craft beers around the United States? Craft beer has become a very popular trend in recent years, and it doesn’t seem to be going anywhere anytime soon. If you’re looking for some great beers to try, take a look at our list below and see if you can find one that speaks to your preferences. These are all US-based beers, so you should be able to find them fairly easily no matter what part of the country you may live in.

Brewed by a somewhat lesser-known brewery in Rhode Island, Proclamation Derivative Galaxy Hopped Pale Ale is a classic pale ale with a lot of hops going on. It’s a smooth but very citrus-packed drink that is great for sipping along with a meal or for refreshing you after a hot summer day. It features a thin head that disappears fairly quickly, and it pours yellow with rich undertones. With a slightly bitter finish and an otherwise fruity body, this beer is ideal for anyone looking for a first pale ale experience.

Toppling Goliath Kentucky Brunch is one of the most popular craft beers in the United States currently. It can be tough to find, but its rich coffee flavor and plum-vanilla notes make it well worth searching. The aroma hits you immediately when you first open this beer, and the dark black color of the brew makes it look as delicious as it smells. Pay attention to the subtle oak notes on the finish of each sip, as they can be a little hard to miss with the powerful coffee taste going on in this drink. This beer is highly sought after and in short supply, so expect to pay quite a bit if you want to taste it.

Brewed in Tampa, Cigar City Hunahpu’s Imperial Stout is aged partially in apple brandy barrels and partially in rum barrels to give it a unique twist on the stout classic. It pours thick and dark with an extremely thin head, which is much different than some other stouts out there. The brandy flavor comes through along with the apples, and it also features an oily texture that adds to the smoothness of this drink. The beer has a spicy smell that doesn’t carry all the way through, making it pleasant to sniff but not too difficult to sip.

If you’re a big fan of imperial stouts, then you’re sure to want to try Three Floyds Dark Lord. This beer is aged in bourbon barrels and allowed to mature along with vanilla beans to give it a much richer and fuller flavor. It features marshmallow notes with slight chocolate, and it has a creaminess that can be difficult to find in some beers. It pours out dark black and features a large head that adds to the creamy element and overall smooth texture of this incredible beer.

One of the many top beers on this list that come from Vermont, Hill Farmstead Ann is made in wine barrels and aged to perfection from the same brewery’s Anna Honey Saison. This ale is homey, comfortable, and just sweet enough, and those who have a chance to try this hard-to-find brew always report being very glad they could.

With vanilla and coffee flavors throughout, Founders Kentucky Breakfast Stout is aged in bourbon barrels to give it a rich, full flavor. It has a higher alcohol content than most craft beers and is recommended to be enjoyed at room temperature rather than cold.

One of the more popular craft beers in the country, Alchemist Heady Topper hails from Vermont and is available in a tall silver can that many fans have come to recognize instantly. This beer has a huge head and lots of bubbles, making it a little different than many of the others on our list. It is a double IPA and is somewhat high in alcohol content for a craft beer.

Cycle Trademark Dispute comes from a lesser-known brewery in St. Petersburg, Florida, and is a bourbon barrel imperial stout with a heavy hazelnut flavor. The beer is powerful from start to finish and is extremely thick and heavy going down. Great for those who enjoy a dessert flavor in their beers.

Available during wintertime, Funky Buddha Last Snow Porter seeks to call up nostalgic memories with every sip. It features a white chocolate and coffee flavor with hints of coconut and looks incredible when poured into a glass. Its dark black color and large head make it appetizing to look at before you ever take a sip.

Lawson’s is a popular name among diehard craft beer fans, and some drive for miles just to get a bottle of their most beloved brews. Lawson’s Finest Double Sunshine IPA is juicy, bright, and features herbal notes on the back end. It features a golden orange color with a slight head that makes it very accessible to newcomers.

There are many varieties of craft beers out there, just waiting for you to discover them. Depending on your preferences in terms of flavor, style, and even brewery, you may want to stick to one type or name over the others. Keep in mind, however, that there are some amazing and great quality beers available from even some of the most unknown breweries around the country. Don’t be afraid to try some of these for yourself and see which ones you might find. You never know when you could be the one to popularize the next big beer trend.