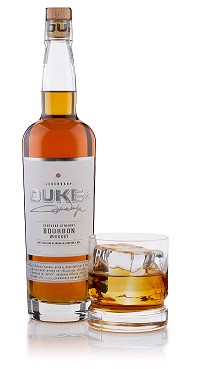 The Style of DUKE Bourbon was inspired by bottles from John Waynes personal whiskey collection, preserved for over 50 years and only recently discovered. Meticulously blended to reflect The Dukes preferred whiskey flavor profile from tasting notes left behind during the time he was planning his own distillery. Distilled the old-fashioned way; hand crafted in small batches and aged in new hand built heavily charred American Oak barrels. A selection of 5 to 10 year old whiskeys are chosen barrel by barrel and blended by hand before the DUKE Bourbon reaches the bottle, and ultimately, you.

Producer
John Wayne, the Man and the Legend, was a hard working craftsman who loved and perfected his craft as an actor. The DUKE, as he was affectionately known, was also a loving father, a fisherman, horseman, hunter, adventurer, and an unabashed patriot of The United States of America. To his credit, he was a loyal friend to many and was passionate about sharing a good drink with his friends. He sought out the greatest American Whiskeys, the finest Scotch, the smoothest Tequilas, and Wines of true merit from all the great Wine regions. Nothing was too good for his friends and he was often quoted as saying that if he was going to have a drink, It had better be a good one.

John Waynes son, Ethan Wayne, remembers his father telling him about his dream to create his own Whiskey, his own Scotch and, of course, his very own Tequila. Naturally, they would be aged just right and crafted in a no holds barred authentic style that could be enjoyed in the finest clubs and restaurants, around the camp fire with a big steak and roast potatoes, on a boat while fishing, or after a hard day of shooting for the silver screen. Ethan never forgot his fathers dream. He joined with us as he said his Father would have, no business plan, no projections, just a mission to make it right for the DUKE. John Wayne had foresight and in the end he knew he wouldnt be able to live that one dream having lived so many others in a golden age. Yet he planned ahead

He saved his writings, he saved his scripts, he saved everything of importance, and, naturally, he left crated up for over 30 years his favorite drinks and his tumblers standing still in time and waiting for his son to open the crate and let all of the words come back. He left an archive, a message, and a reserve of bottles dating back to 1963. Literally, a message in a bottle.

We went to the crate with our friend, Ethan, unsealed it after so many decades, and then we picked up the tumblers he had left for us and tasted the DUKEs favorites.