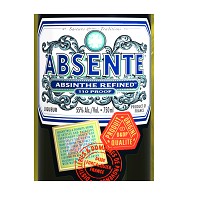 Absente, the first legal Absinthe recipe in the US market since 1912, is still hand crafted in the south of France using only the highest quality artisanal distillation methods and ingredients, including anise, star anise, balm, peppermint and a full measure of the legendary and notorious botanical Wormwood, also known as artemesia absinthium. We know what you’re thinking. Absinthe has been banned in the United States since 1912 because people were hallucinating and having way too much fun, how did you bring Absinthe back? The U. S. Government lifted the Ban on Wormwood, so Absente, Absinthe Refined, can now be simply described as a modern version of one of the original Absinthe recipes from the South of France. It’s still the same aromatic, dazzling emerald green liqueur made from a combination of exotic botanicals. Learn more about our history here. Absente is technically labeled a Vert (green in French) absinthe and derives its unique color and flavor from botanicals. A method practiced and mastered by the French was to add regional herbs like sweet balm to the distilled liquor to introduce additional flavors, aromas as well as a green color to the finished liquid. In order to truly replicate this traditional Artisanal method, we incorporate this legendary technique when producing Absente. Absente can be enjoyed in many ways: mixed with water, or the classic mixture of sugar and water using a slotted spoon.