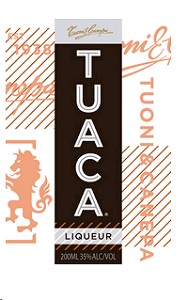 The origins of Tuaca are a little unclear, as most legends are. The original recipe dates to the Renaissance, it is said, and one story has it that the liqueur was created for Lorenzo the Magnificent, a ruler of Florence, Italy, who was a patron to Michelangelo and Botticelli. During World War II, American servicemen stationed in Livorno, Italy (a seaside resort city on Tuscany's Mediterranian Coast), discovered Tuaca's smooth flavor. They searched for the brand upon their return to America, but were unable to find it until the late 1950's, when an astute importer brought Tuaca across the ocean. Tuaca is still crafted today as it always has been, by the Tuoni family in Livorno. First a favorite in Northern California, Tuaca began gathering a following on the West Coast. Grass roots momentum fueled the brand's popularity, as well as locally created drinks such as the Tuaca Hot Apple Pie and the Tuaca Lemon Drop. Its one-of-a-kind flavor also led people to use it not only as a chilled, straight shooter, but also as an extraordinary mixer. Technical notes 35% alcohol
Other text Tuaca is a delicious chilled shot. It's also great in martinis, with coffee or juices, and even in margaritas. It even makes delicious sauces and desserts!