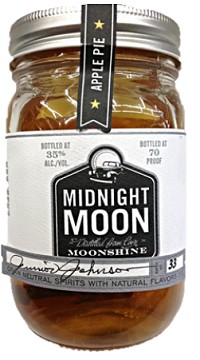 Midnight Moon Apple Pie is a handcrafted blend of midnight moon, apple juice and a cinnamon stick. As they blend and age, these ingredients create a 70 proof (35% alc. /vol. ) Spirit that tastes just like homemade apple pie.

Producer
Piedmont Distillers Founder, Joe Michalek, is a native New Yorker who moved to North Carolina in 1995. Through his job in marketing, Joe had the opportunity to travel the South attending music festivals, NASCAR races and the like. On one such adventure, Joe found himself in a cabin in the woods listening to a jam session by local blues legends, when someone handed him a jar of peach moonshine. At first, Joe was apprehensive to take a sip. After all, he didn't know where it came from or who made it. He did not hesitate long, after all this was the stuff of legends. He took a sip of the illicit brew and was surprised that it tasted great and was very smooth.

Over the next several years, moonshine became Joe's passion. He read books, tasted all sorts of recipes, watched documentaries and eventually earned the trust of local moonshiners. These old-timers shared their recipes, distilling techniques and general tricks of the trade. Once he had learned as much as he could, Joe decided it was time to share North Carolina moonshine with the rest of the world. Piedmont Distillers opened its doors in 2005, with our first spirit Catdaddy Carolina Moonshine. Catdaddy harkens back to the moonshining days-of-old with its corn recipe, secret flavors, copper still and small batch process. In May of 2007, moonshine and racing legend Junior Johnson became part owner of Piedmont Distillers and together we introduced Junior Johnson's Midnight Moon. It is based on the Johnson family's generations-old moonshine recipe. It is also born in a copper still, made from corn, crafted in small batches and triple distilled.

While our first two spirits are moonshines, Piedmont Distillers does not consider itself strictly a moonshine distillery. Rather, our focus is on hand-crafted, superior quality spirits that are made one small batch at a time. We are constantly innovating new spirits that embrace distilling traditions and ingredients of the region, excite the palate and the senses, and offer people something different than what's typically on the store shelves. Piedmont Distillers is a small operation with fewer than ten employees. We are located in the town of Madison (pop. 2000). The distillery is housed in the town's former train station built in 1915. Madison, North Carolina is exactly what you might imagine. A small, Southern town filled with kind folks, many of whom have lived here their entire lives.