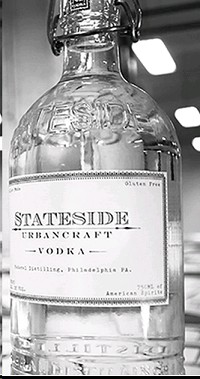 A custom-designed vodka production facility in a once forgotten pocket of Philadelphia Yes. A product that screams, We made this with our own hands, Absolutely. Philadelphia is a town with a rich and rambunctious past. It is a city that created it's own destiny. Stateside Urbancraft Vodka is an ode to our proud and colorful history. It is a tribute to those who have made this city great for generations. It is a promise to our customers that we will never forget what being from the neighborhood means. Finally, it is a declaration of our passion as distillers- Never stop inventing. Never stop improving.

Producer
Perhaps you want to hear a romantic tale about a long family lineage of vodka distillers. Maybe you're interested in a story involving catalogs of top-secret recipes. That is not our story. Our story began with a conversation that consisted of eight words: Across the highly competitive landscape of super premium vodka, how do you make a difference, Practice. And practice often. Five years ago we noticed a corner of our parent's basement that was going heavily unused. It was in this subterranean alcove that we established our headquarters. We scraped together every last cent we could and in no time had the makings of our very own distillery. This is where Stateside Vodka truly began. Over the months, we tweaked and perfected our recipe until we had something we knew was special. That is until our father discovered our operation and decided his home was not the place to make alcohol.

Now even though our test lab had been unceremoniously shut down, we never lost hope. We had been keeping samples of our different distilling runs for months, thus we had some ammo. We shipped some samples off to a professor at Michigan State and a week later we received a call offering us a position for the summer. Game on. The summer in Michigan was like a dream come true. We were distilling like crazy and learning at an incredible rate. But before we knew it, the summer was over. It was time to get back to Philadelphia, and get down to business. In the winter of 2014, through a set of very fortuitous events, we were introduced to the president of a globally prominent liquor company. As a sign of appreciation, we shared some of our samples with him. An hour later we were given our first private contract to work on their products. The following week we were on a plane headed to Europe. Destination: Bielsko-Biala, Poland.

When we returned stateside, we finished up our business plan. Using our years of research, it was finally time to find investors. That same winter, a friend called to inform us that he was heading to the birthday party of a man named Clement Pappas. Clement happened to be the former CEO of a massive juice manufacturing company turned angel investor. We were interested. We armed our friend with a fresh business plan and told him to place it in Clement's office. A week later we got the call. And just like that, Federal Distilling and Stateside Vodka were born.

The last year has been a testament of hard work and steadfast determination. Clement and his brother Zachary joined the team as our investors and continue to work with the business on a daily basis. A lot of people ask us, What's next. Federal Distilling doesn't have a what's next. We have a, here and now. We are concentrated on doing one thing and doing it well. And right now, that one thing is Stateside Vodka.