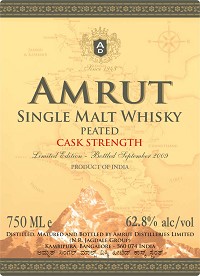 Producer The history of Amrut Distilleries is as old as the history of independent India itself. Indeed, just as India itself, after six decades of notable progress, is now noted as among the global economic leaders, so too has Amrut Distilleries grown both in stature and in size. Among the earliest to enter the then arcane field of liquor making, Amrut Distilleries Private Limited began in 1948 under the name and style of Amrut Laboratories, with an initial investment of barely a few lakhs. The founder was the late Shri J. N. Radhakrishna, J. N. R as he is fondly called to this day. Much of this fascinating story was made possible by the resolve of successive generations of the Jagdale family to embrace value and to discount form for substance. Under the leadership of the founder, Amrut Distilleries made rapid strides to entrench itself as a significant, for many the preferred, supplier of Indian Made Liquor (IML) in the Defence Market. In its state of origin, Karnataka, too, Amrut Distilleries grew to be one of the dominant suppliers, especially in the old Mysore area. After the untimely demise of J. N. Radhakrishna Rao Jagdale in 1976, the mantle devolved on his son, Shri Neelakanta Rao, the present Chairman and Managing Director. Building on the solid foundations laid by his later father, his stewardship has seen Amrut Distilleries blossom into a multi-national brand respected as much for the superlative quality of its products as his campaign for transparent practices by the IML industry. His penchant for innovation and technology-upgrade has been the ideal foil for the time-tested traditions enshrined by the founder. From its beginning as single bottling unit catering primarily to the Canteen Stores of the Ministry of Defence and to local customers in and around Bangalore, Amrut Distilleries has now grown into a trans-national player with:
a) A re-distillation plant to produce superior extra neutral alcohol for captive consumption.
b) Two bottling units - 1 each in Karnataka and the neighboring state of Kerala.
c) Local bottling arrangements with know-how provided by Amrut Distilleries in five other states of India.
d) A portfolio of dozens of products including several that are appreciated by the connoisseurs across the world.
e) An established market spanning the length and width of the country
f) A nascent but burgeoning market across the European Union.
Growth in the product portfolio and in its market size has brought concomitant growth in the financials too. With a paid-up share capital of Rs. 20 million, the company sports a financially healthy look with accumulated reserves exceeding Rs. 250 millions. Turnover has grown astronomically from a mere few lakhs to Rs. 1500 millions a year today. To manage and deliver on its present status as noteworthy national player, the company has also taken on board external talent in substantial numbers and boasts today of a more than thousand-strong workforce of professionals and skilled staff at its various units.